Ad blocker detected: Our website is made possible by displaying online advertisements to our visitors. Please consider supporting us by disabling your ad blocker on our website.
Join the Turbo Driving Forum today. Relax, chill out and post regularly
We welcome all road users!

Firstly, this is the General Lounge for most things to do with our roads. Indeed, most of us at some time use the road system in some way. With this in mind, users may post their experiences or observations here.
Post Reply
8 posts • Page 1 of 1

That's right, the police are still using an unmarked police lorry to catch drivers using mobile phones etc.
I originally thought that the police in the Devon and Cornwall area were using this vehicle.
However, this article says that all 28 police forces are using the DAF lorry.

Apparently, one driver was caught steering his vehicle with his knees whilst eating some food AND texting on a mobile phone.
About two thirds of all those caught using this police lorry were using a mobile phone.
In total, 4,176 drivers were caught with only 400 given a verbal warning there and then.
Around 830 were given fixed penalty notices.
Over 100 of these offences landed the drivers with a court summons.
However, the article does not say what happened to the other 2,800.
One can only assume they were not committing offences as the following article doesn't say.

OK, the police pull over 4,000 drivers with this lorry but it still doesn't make it right. I suppose the police think they can justify things by saying the roads are now safer. I just wonder if they have flashing blue lights and sirens on the lorry

What is the livery?
If you want me, call me a cab

None, but they will have hidden blue lights and a siren though.
The police are sneaky so and so's.
Top

The police truck does have lights and sirens which make it all look so comical and 1984ish. 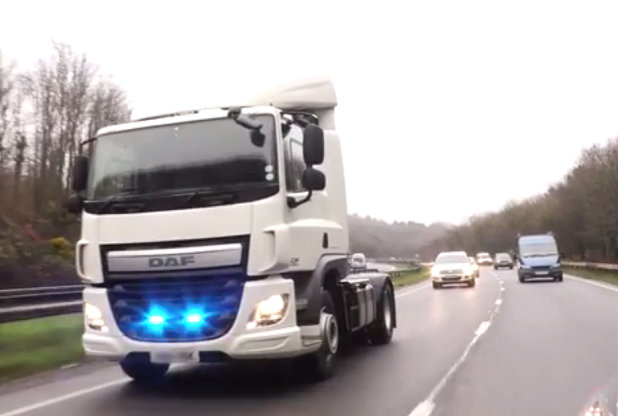 My other car is a Reliant Robin and you can say what you like!
Top